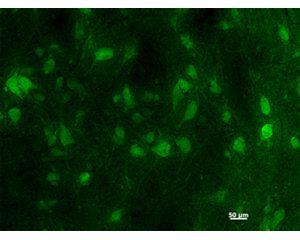 BSENM-1616-100EA 345 EUR
BSENM-1616-100
Anti-Tyrosine Hydroxylase Mouse Monoclonal Antibody [clone: LNC 1; LNC1;LNC-1]
Anticuerpos
Tyrosine hydroxylase is an excellent marker for dopaminergic and noradrenergic neurons. Tyrosine hydroxylase (a.k.a. tyrosine 3-monooxygenase) is the enzyme responsible for catalyzing the conversion of the amino acid L-tyrosine to L-3,4-dihydroxyphenylalanine (L-DOPA). L-DOPA is a precursor for dopamine, which, in turn, is a precursor for the important neurotransmitters norepinephrine (noradrenaline) and epinephrine (adrenaline). Tyrosine hydroxylase catalyzes the rate limiting step in this synthesis of catecholamines. In humans, tyrosine hydroxylase is encoded by the TH gene, and the enzyme is present in the central nervous system (CNS), peripheral symphatic neurons and the adrenal medulla. The enzymatic activity of TH requires ferrous ions as cofactors and is believed to be regulated by phosphorylation. At least four isoforms of human TH have been identified which result from alternative splicing. Tyrosine hydroxylase, phenylalanine hydroxylase and tryptophan hydroxylase together make up the family of aromatic amino acid hydroxylases (AAAHs). http://en.wikipedia.org/wiki/Tyrosine_hydroxylase