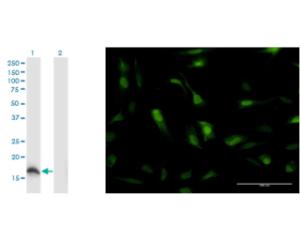 BSENM-1604-100EA 327 EUR
BSENM-1604-100
Anti-superoxide dismutase Mouse Monoclonal Antibody [clone: 10D5]
Anticuerpos
SOD1 binds copper and zinc ions ans is one of two isozymes responsible for destroying free superoxide radicals which are normally produced within the cells and which are toxic to biological systems. SOD1 is a soluble cytoplasmic protein, acting as a homodimer to convert superoxide radicals to molecular oxygen and hydrogen peroxide. Defects in SOD1 are the cause of amyotrophic lateral sclerosis type 1 (ALS1) which is a neurodegenerative disorder affecting upper and lower motor neurons and resulting in fatal paralysis.

The antibody recognizes SOD1 in western blot and ELISAs other applications have not been tested. Tested reactivity so far has been human, other species not yet tested.
Application Information:
WB, ELISA.Biosensis recommends optimal dilutions/concentrations should be determined by the end user.