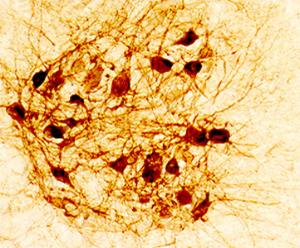 BSENM-006-100EA 334 EUR
BSENM-006-100
Anti-p75NTR Mouse Monoclonal Antibody [clone: MC192]
Anticuerpos
Monoclonal antibody MC192 against the rat low affinity nerve growth factor receptor (p75NTR) is derived from the fusion of Sp2/0-Ag 14 myeloma cells with mouse immune splenocytes. MC192 monoclonal antibody was originally generated by Chandlers et al. p75NTR was originally discovered as a low affinity nerve growth factor receptor. Later it was found that it was the receptor for all neurotrophins. It mediates signals of neurotrophins for neuronal survival, apoptosis, neurite outgrowth and synaptic plasticity. Recently, it has been revealed that p75NTR is not only acts as the receptor for neurotrophins but also the receptor for many other pathological ligands such as prions, rabies virus and amyloid beta. p75NTR also acts as a co-receptor for NOGO which mediates inhibitory signals of myelin associated protein. p75NTR is highly expressed in a number of non-neuronal and neuronal cells including motor neurons during development and also in damaged neurons. MC192 recognizes the extracellular domain of the neurotrophin receptor p75NTR in rat. MC192 antibody may be used for immunocytochemical localisation of rat cells expressing p75NTR, ELISA and western blot. This antibody has also been used for the construction of the MC192-saporin immunotoxin for specific elimination of neuronal populations in basal forebrain cholinergic neurons to generate an animal model for Alzheimer's disease. Using Flow Cytometry, this antibody has frequently been employed for panning to isolate p75NTR-expressing rat cells. MC192 has a potential use as the ligand for gene delivery into p75NTR-expressing rat cells via a receptor-mediated mechanism. FUNCTION: Low affinity receptor which can bind to NGF, BDNF, NT-3, and NT-4. Can mediate cell survival as well as cell death of neural cells. SUBUNIT: Homodimer; disulfide-linked. Interacts with p75NTR-associated cell death executor. Interacts with NGFRAP1/BEX3. Interacts with TRAF2, TRAF4, TRAF6, PTPN13 and RANBP9. Interacts through TRAF6 with SQSTM1 which bridges NGFR to NTRK1 (By similarity). Interacts with BEX1. SUBCELLULAR LOCATION: Membrane; single-pass type I membrane protein. DOMAIN: Death domain is responsible for interaction with RANBP9. PTM: N- and O-glycosylated. PTM: Phosphorylated on serine residues. SIMILARITY: Contains 1 death domain. SIMILARITY: Contains 4 TNFR-Cys repeats.

Specificity has been confirmed by immunohistochemical staining of lesioned sciatic nerve and spinal cord, the results reflect the reported literatures.
Application Information:
IHC, ELISA, WB, Motor neuron isolation, Gene/Toxin Delivery to rat sensory/motor neurons. A working solution of 1-2 µg/ml was determined by immunohistochemical staining on paraformaldehyde fixed, alcohol fixed and paraffin-embedded sections of rat spinal cord and brain. MC192 is not suitable as a blocking agent, although it has been incorrectly used for this purpose in many published works. The antibody was generated specifically by screening for monoclonals that had the ability to ENHANCE the binding of NGF, the natural ligand for p75. Therefore, this antibody is particularly unusual. The full details can be found in the original paper, which is listed on our datasheet (see Chandler et al, 1984). Biosensis recommends optimal dilutions/concentrations should be determined by the end user.