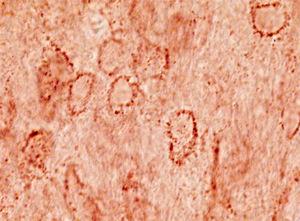 BSENR-056-100EA 345 EUR
BSENR-056-100
Anti-beta synuclein Rabbit Polyclonal Antibody
Anticuerpos
Beta-synuclein is a non-amyloid component of senile plaques found in Alzheimer disease. It could act as a regulator of SNCA aggregation. It protects nerurons from staurosporine and 6 hydroxy dopamine -stimulated capspase activation in a p53-dependent manner. It localises to the cytoplasm and it is predominantly expressed in the brain where it is most concentrated in presynaptic nerve terminals. This protein is phosphorylated. This protein is also associated with the disease Brain iron accumulation type 1 (NBIA1).

Less than 0.1% cross reactivity to human alpha synuclein
Application Information:
IHC, WB , immunoblot. A dilution of 1:500 to 1:2000 is recommended for these applications. Biosensis recommends optimal dilutions/concentrations should be determined by the end user.